Not far beyond the quaint little garden scenes that begin to bloom as summer approaches, lives a fun film suitable for the whole family: Gnomeo & Juliet. From a director of Shrek 2, and featuring fun, all-new music by Sir Elton John, this film features a quirky, family friendly twist on Shakespeare’s classic story, Romeo and Juliet.

The characters are fun and engaging, the storyline is entertaining. Preschoolers giggle right along side their older siblings and there’s enough humor to inspire laughs from the adults too. This movie is silly fun the entire time and captures a joyful side of the classic Romeo and Juliet. Not only is the tragedy of the story left behind, Shakespeare himself makes a few appearances just to clarify where the story should go. Gnomeo and Juliet is definitely worth watching more than once, in my opinion.

This animated movie first hit theaters in February 2011 and is now available on Blue-ray and DVD combo pack.

Here are three printable activities for kids featuring the Gnomeo and Juliet characters and scenes. 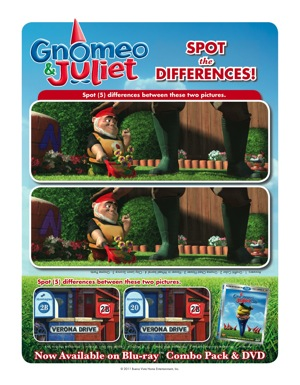 I was provided a free DVD/Blu-ray copy of this movie to review. The opinions I have shared are my own.